Behind the Scenes at the Chatham Fairgrounds 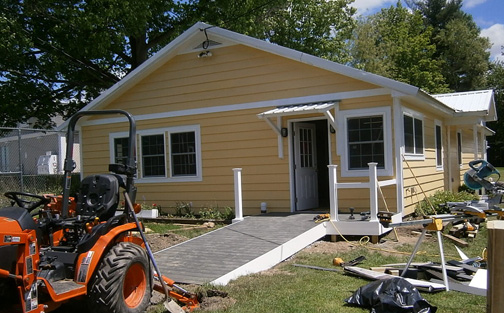 Fair officials and volunteers work year ‘round planning for a bigger and better Columbia County Fair. This year, construction of a new ramp providing wheelchair access to the Fair Office is just one of the projects in the works. Discussions of improvements start almost a year ahead of time. The 2019 Fair in Chatham opens on Wednesday, Aug. 28th and runs through Monday, Labor Day, Sept. 2nd.

CHATHAM – Late last fall, when most people were beginning to think about roasting turkeys, raking leaves and tuning up the furnace, Board members of the Columbia County Agricultural Society were making lists of what needed to be done at the fairgrounds.  From the moment the 2018 Fair opened, seasonal workers, volunteers and professionals were offering suggestions of how to make the Fair better for next year.

“Here’s an example,” says Angelo Nero, Secretary and the longest serving Board member.  “Every year, we plant a few young trees in the parking lot.  They provide some shade, but when we have to remove a tree from the Fairgrounds, we go out to the parking lot and transplant one of those that has started to mature.  It’s much less expensive and lets us replace aging trees with newer ones without too much disruption to the Fairground itself.”  Last year, a 125-year-old tree was dying.  When the time came, a parking lot transplant took its place.  “We’re known for our beautiful Fairground,” Nero added.  “This way, we keep the shade trees that our visitors appreciate so much.”

Lighting in the fairgrounds has been updated, too.  Newly installed LED lights require less frequent replacement and reduce electricity costs.  “Most people don’t realize that the Fairgrounds are privately owned by the Agricultural Society,” Nero explains.  “We work to make this a welcoming environment for the whole community and, when not booked for a specific event, people are welcome to take advantage of the grounds.  But it’s the responsibility of the Agricultural Society to maintain the infrastructure and improve things as much as we can.”

Each year, small changes add up to lots of improvements.  Sometimes they are not very visible (like replacing a tree). But, sometimes they are obvious.  In 2018, the Fair debuted a much-improved Poultry Barn.  This year, thanks to a grant obtained by the State Fair Association, the Fair office sports a new ramp for wheelchair access as well as some interior re-configuring to make the “hub” more handicapped accessible.  “It was just kind of makeshift for so long,” Nero explains.  “Now, we’ve moved the rooms around so they make more sense.  Since we’re trying to run a great Fair, having the administration building well organized is a smart idea.”

The Columbia County Fair was awarded “#1 BESTIE” this past January by readers of Capital Region Living Magazine. The comfortable ambiance probably played a part in that vote.  The fairgrounds cover 82 acres, much of it green grass and shade trees.  There are also loads of bedding flowers and hanging baskets – upgraded each year.  Altogether it makes for the perfect place to celebrate the county’s agriculture.