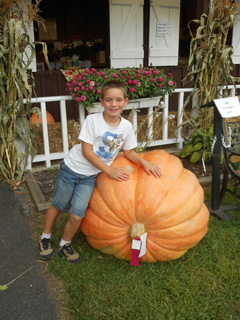 Blake Rogers stands next to a giant pumpkin at a past Columbia County Fair. This is the first year the fair has included a separate Giant Pumpkin Contest.

CHATHAM — Gardeners with a serious green thumb who harvest a pumpkin weighing more than 75 pounds are encouraged to enter it in the first Columbia County Fair Giant Pumpkin Contest. The contest is open to those who grow pumpkins in Columbia, Greene, Rensselaer, Dutchess and Berkshire counties, according to Superintendent Julia Horst of Chatham.

“My hope is to see a whole group of people getting excited about agriculture and a fun competition,” said Horst who noted this is the first year for the contest. Exhibitors or their family must have been responsible for the growing and care of the pumpkin, she said. Contest winners will be chosen based on weight.

Previously, giant pumpkins were only able to be shown under one of the pumpkin classes in the vegetable department. “For some people, this was disappointing because they tried very hard to grow huge pumpkins but their pumpkin would lose to a much smaller one that better met the appearance requirements,” said Horst. “So, we had an idea — why not create an entirely new department just for those really big pumpkins and see who can grow the biggest one,” she added. Pumpkins that weigh in under the 75 pound guideline may still be entered in the vegetable department, where they are judged on freedom from blemish, color, size, form, condition, conformity to pumpkin type and eye appeal.

The contest is sponsored by Chatham Hardware. “Chatham Hardware has been very supportive of youth and agriculture in our area,” said Horst. “I appreciate their willingness to give this event a chance.”

Pumpkins will remain on display for the entire fair which runs this year from Aug. 30 to Sept. 4.